Reporting to parents, celebrating achievements and school transitions are just some of the things Flatbush Primary is approaching differently as a result of Covid-19. 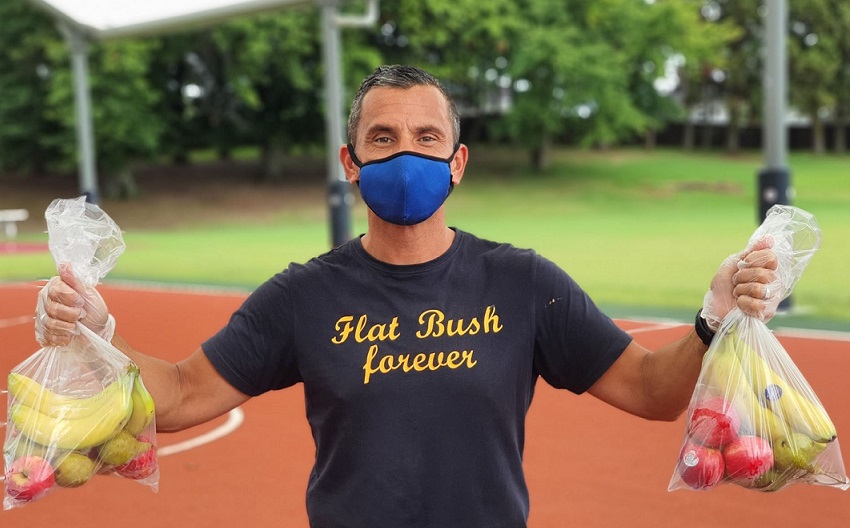 Principal Banapa Avatea’s links with Flatbush School run deep.  On a shelf in the principal’s office an old staff photo, taken many years ago reveals his mother, then a young teacher on the school’s staff.

“She was carrying me when this was taken so you could say I have spent all my life at this school,” he says.

Those connections and commitment, no doubt stood him in good stead during the last challenging two years.

Term 1 this last year has been the school’s hardest yet during the pandemic, and Banapa says it impressed on him just how resilient children are – as they have had to be,  especially this term.

Flatbush School had its first case on 21 February and by the 22nd further close contacts had been identified. That night the phones did not stop while all families were contacted and by late February the whole school was affected in some way.

Parents were anxious, but as a community, stood with and behind staff, firmly committed to keeping everyone safe. At one stage only 80 students were able to attend school, and 17 staff had to stay away. It was difficult for many families, especially with multiple generations in the same home and heightened concern about older family. It was difficult, too, for teachers who had to plan and re-plan as the Covid situation kept changing.

Remarkably, with clear communication and connecting with families, the school had 360 students – 87 per cent – back by the end of Term 1, and it continues to engage with those still to return.

The school has provided food parcels, worked to connect all families to the internet (an ongoing task) and sent Chromebooks home. Past work connecting with the community and building relationships has paid off and the school received some generous donations, including 15 Chromebooks, to add to the support redirected by the Board of Trustees.

Banapa says staff have learned a lot about themselves during the pandemic. They’ve learned to be more flexible and able to adjust when things are constantly changing. They’ve also learned that some things don’t change -- parents are anxious about their children and want the best for them, teachers and support staff want to do the best they can for their children. When a leader can put themselves in those shoes, it becomes easier to identify what needs to be focused on.

Providing consistent support and communicating with integrity helped to build on the school’s already strong culture and the confidence the community had in the school.

Clear, consistent and timely communication proved vital -- using every possible channel available whether online or face to face helped ensure that everyone had the information they needed to feel confident and reassured that what was being done was what needed to be done.

Information from the Ministry of Education helped, though at times it felt overwhelming and could land late in the day, which was a challenge given the need to review processes for the following day and to translate key messages for the school’s predominantly ESOL community. Having a strong leadership team helped, and the team spent time each day talking through what they needed to do.

A supportive Board provided resources that enabled Banapa to support the teaching and non-teaching staff. Keeping them all connected (online for much of the time), ensuring there were social interactions, regular meetings, celebrations of positive actions and, at times, care packages meant staff felt valued and appreciated and were in the best possible place to both model calm responses to the pandemic as well as excitement about learning opportunities.

The school notes several opportunities to have come out of the pandemic. As well as celebrating achievements across social, academic, arts and sports, the school has reframed the way it reports to parents. Its new system provides a celebration each term of each child’s success and, in turn, affirmation of their parents’ success as parents. The language the school will use speaks more effectively with its families, too, such as identifying 3 stars and a wish rather than talking about ‘setting objectives’.

Another positive has been the establishment of a transition room for the school’s new 5-year-olds. This cohort of students has missed out on participation in early learning centres and general play with peers, so the focus of transition will be on social skills and learning to regulate emotions, for example learning to take turns, learning through games, losing without feeling your whole world has ended while also learning to win with humility.

Banapa sees his role as maintaining connections, keeping everyone well informed and supported, and helping the school to move forward. He knows some things have not been as successful as they might and is realistic – “it can’t all be rainbows and unicorns” – especially given there are further challenges ahead (in addition to the 23 building projects completed since he started at the school). Yet, having built and maintained a positive school community, Banapa knows they will work together to manage whatever comes next.